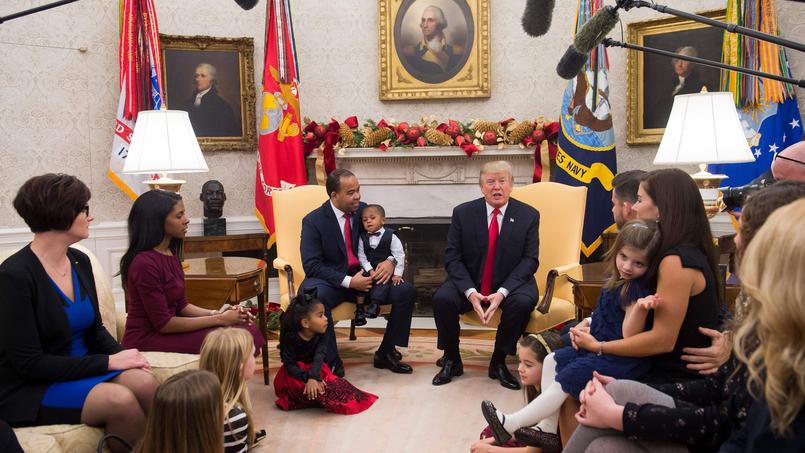 VIDEO - The Senate voted in favor of the text Wednesday, paving the way for a major political victory for the president and his majority, who play ..

VIDEO - The Senate voted in favor of the text Wednesday, paving the way for a major political victory for the president and his majority, who play a large part of their political capital on the virtuous effect they attach to this reform.

Donald Trump finally holds a great legislative victory, the first since his arrival at the White House eleven months ago. The House of Representatives voted on Tuesday for tax reform by 227 votes against 203. The Senate, with a Republican majority, followed in the night, shortly before 1 am: 51 senators voted for the reform, 48. The House is scheduled to reapply Wednesday morning to adopt a consistent text, but this is a final technical vote. The president, who introduced the law as "a big, nice Christmas present to the Americans," should sign it before the holidays.

The elected officials largely respected their partisan affiliation, the Democrats blocking opposition. The Democratic senators have nevertheless made retort three minor articles violating according to them rules of procedure senatoriale.

Donald Trump thus respects one of his main election promises and achieves a goal long sought by the Conservatives. Their dogma, according to which wealth flows from top to bottom, inspires this reform of the Tax Code, the largest since Ronald Reagan in 1986. The belief that by easing the tax burden on the richest, we stimulate growth and employment is not unanimous, however. The last hesitant Republican senators returned to the ranks Monday when an independent analysis of the Tax Policy Center concluded that in its final version, the law would only increase the tax burden by 5% of taxpayers next year.

"This text will ease the pressure on workers and their families, encourage job creation in the United States and stimulate economic growth that will benefit all Americans," said Maine Senator Susan Collins, announcing his rallying. "We think that because of lower corporate taxes, wages will increase," said Treasury Secretary Steve Mnuchin on Sunday. In the immediate future, however, the stock market has soared, reflecting the euphoria of American investors.

The president and his majority play a large part of their political capital on the virtuous effect they attach to their reform. Last week, while the law seemed in danger for want of unanimity among the elected Republicans (with Senator John McCain treated for a brain tumor, the majority could only count on 51 votes out of 100), Trump staged five families in the Grand Foyer of the White House, inviting them to tell the microphone how much they would benefit from measures still negotiated on the Capitol. "The tax law belongs to the Glick, Kovacs, Giampolo, Benjamin, Howard and millions of Americans who, like them, bleed for their family," said the president.

"Salesman-in-chief" of his policy, Trump focused on the objective, leaving the fiscal mechanics to the elected and modifying its requirements on the thresholds of taxation according to the compromises. "That's what business people do, they focus on the deal," commented Stephen Moore at the Heritage Foundation, a conservative think tank close to the Administration. The president has not engaged in the specifics of the law, but it is not a problem. "Drawing lessons from his failure on the reform of Obamacare in April, the White House had set up a a small follow-up unit with Steve Mnuchin, the economic adviser Gary Cohn and the legislative director Marc Short, thus avoiding the cacophony.

Despite the hyperbole he attaches to all his successes, the president is not sure to relaunch his presidency with the vote on Tuesday. The public, apparently, remains skeptical: 55% of the opinion would oppose the tax cuts, 33% favorable, according to a survey for CNN. When asked who will benefit the most, Americans answer 76% of large companies, 69% rich, 31% middle class and themselves only 24%, according to CBS News. Trump's argument that "it's going to cost me a fortune, believe me," is also contradicted by the addition of a 20% deduction for real estate investors: Forbes magazine estimates it will save money. millions of dollars a year to his family.

The absence of bipartisan work has weakened the reform, limiting its fiscal impact for lack of supermajority and imposing temporary measures. Democrats hold their campaign argument for 2018: "We will point out that Republicans have granted large permanent tax cuts to large groups and small temporary cuts to middle-class families," said Maryland Senator Chris Van Hollen.